The use of threats, imprisonment, and torture against human rights activists by Uzbek authorities is well-documented, as is their shoot-to-kill policy when dealing with protests. And that’s only what actually GETS documented; journalists within the republic who try to report on the injustice are given jail sentences on trumped-up charges, and frequently disappear without trial, while foreign reporters and human rights investigators are simply turned away at passport control. 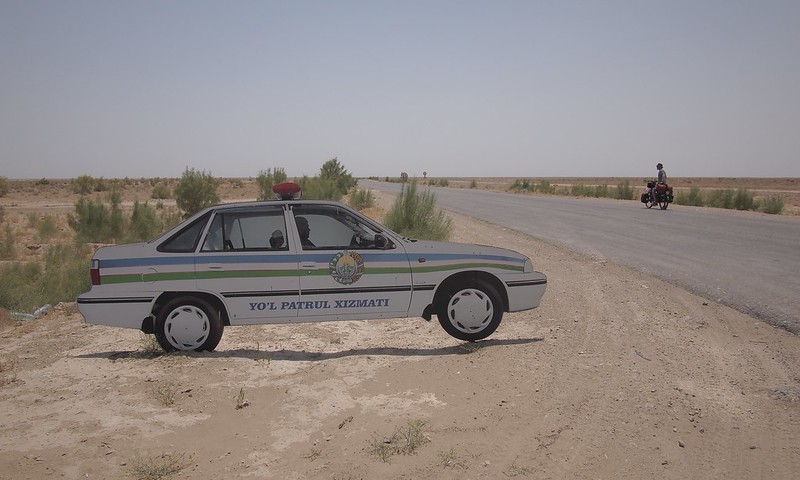 This made my regular dealings with smiling police officers very uncomfortable. I was aware that these people represent a harsh system of control, however, their behaviour towards me was always decent. Police at the (frequent) checkpoints were always more friendly than their British counterparts, although that’s hardly cause for congratulations. They usually seemed genuinely interested in what I was doing cycling so far alone, their questions were never too intrusive and although it seemed pointless and excessive to have a checkpoint every few hundred kilometres, the interactions were usually friendly enough. I am, however, aware that it’s often necessary to paint a certain image of your nation for visitors.

One cop at the checkpoint outside the town of Jasliq moodily directed me to continue along the highway and refused to let me turn off into the village to visit a shop, directing me to take water from a grubby hosepipe instead. I ignored the instruction and rode in anyway, the village was pretty standard, not a single public flogging in sight. It may have been my beard which put him at odds with me. There were quite a few comments about my beard from the authorities, most of which I simply didn’t understand, some were in jest, two or three were obviously seriously irritated by it; in Uzbekistan to combat extremism large beards are banned. Something I find slightly ironic.

I was deported from Azerbaijan for failing to meet their registration requirements. Having learnt my lesson, I was determined to avoid problems of this type again in Uzbekistan, a country with a similarly ridiculous and redundant registration policy (because foreigners checking in to hotels every few days will be sure to stop them from spreading sedition and photographing military installations). I spoke to three different border officials upon entry to try to find out what exactly the registration requirements were then multiple other travellers to hear their take on the matter. Eventually the confusion was cleared up; if you stay in one place for more than 72 hours you are required to register. In practice though, this means you have to register every 72 hours, unless you have a way to demonstrate that you were not staying put. The rules were academic anyway, I didn’t find a hotel until day six, having somehow missed an enormous roadside hotel, the only building on a straight road running through a featureless desert. I was in violation of my registration requirements, again.

The people themselves struck me as happy and were in no way afraid to talk to me, despite the tales of interrogation for interacting with outsiders. I was invited to stay with locals on a few occasions only one of which I was able to accept, but they seemed perfectly comfortable having me there and even invited a neighbour to join us as she spoke some english. Camping was also easy and nobody troubled me or seemed troubled by me. It is of course possible that these people have subsequently been interrogated or disappeared for communicating with a foreigner.

I was frequently treated very well by locals in villages. One morning having run out of water I stopped to ask a man if there was a shop or pump I could use nearby. He gestured to follow him to his home nearby where he filled my bottles from his well which he very proudly explained came from 80m underground. He was right to be proud, it was the best water I’d had in days. Before I had a chance to explain that I had eaten merely thirty minutes earlier, he had his wife cooking plov and his children running around serving it to me. 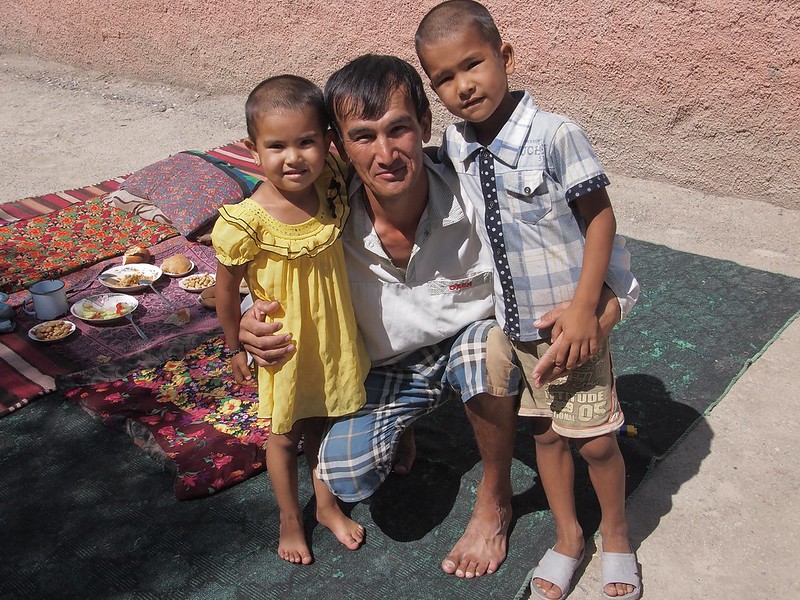 On another occasion while taking a break near Kungrad I was talking to a young man and during our conversation an elderly woman walked by several times with no obvious direction or purpose. When our conversation ended he went to leave and was almost immediately intercepted by the woman, and although they spoke in Uzbek, it was easy to tell that she was insistent on gleaning all the information she could from him regarding our conversation. I suspect the old days of mistrust are easing off and citizen informant networks are a thing of the past here, however, sometimes old habits die hard. It is possible the older members of society still entertain the idea that it is necessary. It might just be she was a nosey old bint, like I’m sure exist in all small villages around the world.

I was fairly confident that, being a cyclist, i would be shown some leniency at the border for my registration cock-up (I was also one further slip short). Despite my confidence, I hid the majority of my cash inside the frame of my bike in an attempt to avoid paying any “fees” at the border. I stuck the registration slips I did have conspicuously inside the photo page of my passport and set about attempting to leave Uzbekistan, preferably avoiding deportation, imprisonment or capital punishment.

In preparation of the notoriously thorough checks at Uzbek borders I cleared my laptop’s search history of articles such as “Religious persecution in Uzbekistan”, backed up my photos to my Flickr page (www.Flickr.com/GearsWeNeverUse), skimmed over my pictures for anything that could be suspicious and regretfully erradicated any suggestion of pornography. Due to my registration issues I wanted to be careful of giving any more reasons for trouble and I heard from other travellers that they would check for these things.

I presented my customs declaration to the woman at the desk and she gave me a new form to fill in, now describing what I intended to leave with. I asked if I could have a copy of the form in English as my Russian vocabulary only contains the words “Hello”, “Thank you” and “No Russian”. Nobody could find an English form so she helped me through it: “Do you have any money?” I began to count out $23 in small notes before revealing a wedge of Som worth about a quid prompting her to draw a line through the box for currency and to move on: “You have drugs?”... “Nope” I replied proudly. This was as far as my customs declaration went and instead we just had a chat about what I was doing and where I was going, then she wished me well and pointed me to security. I dismantled my luggage from my bike, fed it through the x-ray machine, got a quick but intimate fumble from a guy with a gun and was pointed to passport control. No chit-chat there.

The immigration chap was a bit more friendly, but unfortunately for me it was immediately obvious that he was a stickler for the rules. He checked my passport thoroughly, paying special attention to my visa before calling another member of the team to verify that my bearded face matched the beardless one in my passport photo. He asked me about my travel plans (standard stuff) and showed great interest in the trip all the while fiddling with my passport, flicking through every single page, scrutinising every registration slip and typing the information into the computer as he went. Watching for about ten minutes I wondered what my punishment would be for failing to keep the authorities aware of my whereabouts. Probably summary execution. After a while he gave me my passport, smiled and wished me luck.

I was kinda disappointed, I was at least hoping for another deportation letter to add to my collection, better still some authentic police state brutality. There are a few conclusions I could draw from my time in Uzbekistan: that the state crushes all criticism and everyone is terrified to open their mouth. The state is really of no interest to people in their daily lives so they are pretty happy. Or, the people are completely disinterested in politics and just don’t imagine a problem. Whatever the case, figuring it out as a tourist is impossible, and speculation on the topic is pointless, I’ll leave it to the human rights inspectors, if they ever let ‘em in.